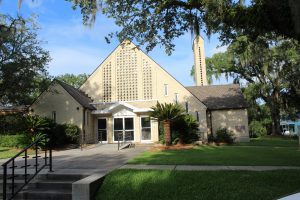 St. Alphonsus Parish is a relatively old parish but by no means one of the oldest along the Gulf Coast.  St. Alphonsus’ date of establishment {according to the diocese} reads 1872, recognizing the fact that there was much activity in the area prior to that date.  Mobile and New Orleans, of course, were areas of Catholic population prior to any sizable populations in these areas of the Gulf Coast.  In these early days, Catholic missionaries, often Jesuits, traversed these areas, down some missionary work as they traveled between these two cities.  Cons sequently, many early records of baptism, marriage, and death were recorded in either Mobile or New Orleans.  The first diocese in Mississippi was established in Natchez (then being a busy river town) in 1837 with Rev. John Joseph Chanche as its first bishop.  A number of years after that, some coastal parishes were established: Nativity in Biloxi in 1843, Our Lady of the Gulf; Bay St. Lois in 1847, St. Paul; Pass Christian in 1847, and Our Lady of Victories: Pascagoula in 1855.  These parishes and their pastors would be responsible for surrounding areas that did not have a church of their own and would visit those areas as time permitted.

Ocean Springs, of course, would have seen some Catholic presence here right from 1699 with the arrival of the French settlers who brought a chaplain with them.  According to one record, daily Mass was offered together with the administration of the sacraments, for several years to these French Canadian explorers, as they were preparing to establish colonies in Mobile, New Orleans, and Natchez. After the departure of these early French settlers, this village of Ocean Springs, then depended on the occasional visits by neighboring priests.  One of those visiting priests(Fr. Greinon from Pass Christian) wrote to the bishop stating that “I said Mass twice in Ocean Springs.  There were only seven persons at Holy Communion.  Some four or five men cam to confession but were not fasting. I baptized two children.  It is a pity to see those Catholics so neglected by want of priest” (1857).  Shortly afterwards, the Bishop urged Fr. Pont from Pascagoula to take on Ocean Springs as a mission, and he quoted Fr. Georget of Biloxi as saying, “there are about one hundred Catholics there and they are willing to give work and money too.”  Ocean Springs was finally put under the care of Fr. Georget and entrusted to his immediate care.  The bishop wrote to him saying, “I will be thankful to you you will give them and English sermon whenever you can” suggesting that many of them were still using colonial French.

Two years before the Civil War (1859), Fr. Georget bought lumber for a Church at Ocean springs, measuring 50’x 25′, very plain.  In that sam year, Joseph Bellande and his wife deeds a lot measuring 192′ x 100′ for the sum of $100.00, presumably for a church.  This lot was located on the south side of Porter Street, W of dewey Ave. no the site for City Hall.  during the Civil War, It is doubtful if Mass was celebrated on a regular basis at this location.  By 1871, Fr. J.J. Finn was named as the first resident priest in Ocean Springs to a damaged church with no rectory.  In the following year, he reported buying a lot for a new church for $300.00, probably the site of the present day church located on Jackson, on the Not the side of Calhoun.  By 1873, Fr. Cavalier from Biloxi appears on the scene and a new church building project moves ahead. On Feb. 25, 1874 he reports that a new church had been dedicated on the previous Sunday and “all of the priests of the coast were present.”  The sermon was perched by Fr. Wise, and noted the building had const over $1,500.00.  In the following years, many names of priests appear as having served here.  Fr. Oberti, Fr. Meerchaert, Fr. Van Queckelberge (who died of yellow fever during the epidemic), Fr. Peters, Fr. Oberfield and Fe. Bohmert.

A record from 1883 states that Bishop Jannsens blessed and opened a two-room school run by two lay teachers with an enrollment of 32 students in grades 1-8.  The Marinate Sisters took over on Oct. 9, 1887 in the whitewashed building where the boys were in one room-girls in another, on a site close to where the present day rectory stands.  The Sisters’ convent was at the foot of Jackson Avenue on the beach.  By 1900, the school was moved to Jackson Avenue, close to the not the end of the present school building.  Fr. Aloise Van Waesberge was pastor from 1892 -1916 and during his tenure here, the church was enlarged to the East to accommodate the growing congregation.  He was succeeded by Fr. H Mortier; who remained here until 1903 and was affectionately known as “Fr. Henry.”  He never owned a horse or buggy and walked fro miles on his pastoral visits.  This same priest had also served at Annunciation in Kiln and was also well known there for walking the roads and often spending the night in a parishioner’s home.  By 1919, this parish became the responsibility of Fr. Joseph H. Chauvin, a French Canadian native, who also spent his first priestly years at Annunciation in Kiln.  He was here during times of prosperity and depression.  He was credited with being the first pastor to put heat in the church—a large coal burning heater that he had to attend to in the early hours of the morning to heat up the church.  Many of our present day (older) parishioners still remember this pastor fondly.   On his retirement in 1940, he served as chaplain at the retirement home of Cabrini Sisters on the beach and when his faculties began to fail, he returned to his native Canada where he died.

Fr. Deignan was appointed pastor in May of 1944 and remained here for more than twenty years – during whose pastorate the present church was built, along with the present school {old part} and rectory.  Many of the old wooden buildings were moved during that period to make way for a modern school building.  One of these buildings was moved in 1963 to serve as a Parish Hall and again in 1969 to Washington Avenue were it served as a Kindergarten building for a number of years – only to be torn down in the early 2000’s as it had deteriorated to a dangerous condition.  Fr. Deignan passed to his eternal reward in 1965 and is buried in Evergreen Cemetery in Ocean Springs. Msgr. Gregory Kennedy was appointed pastor here in 1965.  He is buried in Evergreen Cemetery near Fr. Deignan but in a family plot beside his mother and sister.   Msgr. Eamon Mullen was appointed pastor in 1970, who in turn was succeeded by Msgr. James J. Hannon. During Msgr. James Hannon’s pastoral in 1980, he added a weekday chapel with 24 hour adoration between the rectory and church.  In the Chapel, 6:30 am daily Masses are celebrated and parishioners are encouraged to come and pray before the Blessed Sacrament at any hour of the day or night. Msgr. James J. Hannon died in March 16, 2008.  He is buried in Evergreen Cemetery, close by Fr. Deignan in a well-marked grave.   Msgr. Hannon was succeeded by Fr. Bernard Farrell in 1989 who in turn was succeeded by Fr. Henry McInereny, in 2002 and our present pastor, Fr. Mike Snyder in 2014.

The old sister’ convent (Marinate) on the beach together with the retirement home of the Cabrini Sisters was destroyed by Hurricane Camille in august 1969.  The newer convent was built north of the school on Jackson Avenue in 1970 and served as the Religious Education Center for the Hispanic Community and presently occupied by the Notre Dame ACE students.  The present day Parish Hall/Cafeteria was built in 1972 also housing a small library until the present day school library was opened as part of the school expansion together with a new Gymnasium in 1999.  the school received AA accreditation in 1981 and celebrated its 100th Anniversary in 1983.  It received the “Blue Ribbon Award” in 2004 and celebrated its 125th Anniversary in 2010.

Thanks to Ray Bellande of Ocean Springs for his assistance in procuring some of this information.